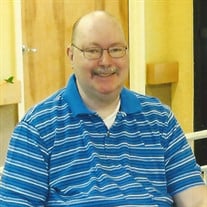 Farmerville, LA - Albert Stark, age 68, of Farmerville, LA. formerly of Water Valley, MS. died Wednesday, January 30, 2019 at Union General Hospital in Farmerville. He was born August 5, 1950 in Water Valley, MS to the late Luke Earl and Mary Bonner Stark. Albert was a graduate of the Water Valley High School Class of ‘69 where he was voted the “Most Intelligent” boy. He received an associate degree from Northwest Community College and later went on to Ole Miss. Albert was a very gifted artist on canvas and tin, even winning five first place prizes with his tin sculptures in the Paramount Healthcare Olympics. He also loved working on all kinds of electronics, specializing in computers. Visitation is planned for Monday, February 4, 2019 in the Gardiner room at Seven Oaks Funeral Home from 10:00 AM until 11:00 AM with services to follow at 11:00 AM in the Henry chapel at Seven Oaks. Interment will be at Oak Hill Cemetery in Water Valley, MS with Bro. Freddie Moorman officiating. Albert is survived by one sister, Ann Carr (Larry) of Water Valley, MS; five brothers, John Stark (Judy) and Elias “Levi” Stark, both of Guntown, MS, Moses Stark of Baldwyn, MS, Danny Stark (Connie) of Dalton GA, and Randy Stark (Lori) of Chatsworth, GA. Along with His parents, Albert was preceded in death by one sister, Mary Elizabeth Mallard.

The family of Albert Stark created this Life Tributes page to make it easy to share your memories.

Send flowers to the Stark family.