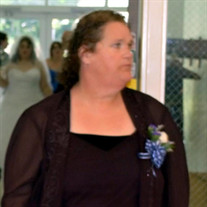 Alice Marie Garrett, age 53, of Water Valley, MS died unexpectedly Monday, June 14, 2021, at North Mississippi Medical Center in Tupelo. She was born September 13, 1967, in Peoria, IL to the late Casper and Elsie (Henson) Smith. Not long after graduating from high school, Alice married the love of her life, David, and became a Navy wife. She followed David to his different duty stations over the course of the next eight years, during which they had five children. After settling down, Alice began working in the retail industry, all the while taking care of her family. After moving to the Water Valley area, she and David opened “Da Bears Den” bakery on Main Street where she served the community by making baked goods. When not working, Alice loved to ride her own Harley trike along with David and travel to the Smokey Mountains where they loved to tent camp and cook over a dutch oven. Another of her passions was scrap booking. She even made a scrap book for each of her children. But nothing held a deeper place in her heart than that of her family. Visitation is planned for Thursday, June 17, 2021, in the Gardiner Room at Seven Oaks Funeral Home from 5:00 PM until 7:00 PM. Services will be held Friday, June 18, 2021 at 1:00 PM at Camp Ground Baptist Church with Bro. Jerry King officiating. Burial will be in Camp Ground Cemetery. Alice is survived by her husband of 35 years, David Garrett; one son, David Lee Garrett (Kaitlyn) of Camp Lejeune, NC; four daughters, Marie Garrett of Decatur, IL, Samantha Garrett of Chillicothe, MO, Bonnie Ogle (Chris) of Roxboro, NC, Sharon K. Garrett of Mossville, IL; two grandchildren; and seven brothers. Alice was preceded in death by both of her parents.

The family of Alice Marie Garrett created this Life Tributes page to make it easy to share your memories.

Send flowers to the Garrett family.