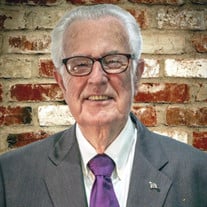 Arnold Wayne Carothers, 91, died Thursday, March 24, 2022, in Biloxi, Mississipppi, with his family around him Visitation will be Monday, March 28th, from 5:00 to 7:00 p.m. at Seven Oaks Funeral Home. The funeral service will be Tuesday, March 29th, at 2:00 p.m. at First Baptist Church in Water Valley. Visitation at the church will begin at 1:00 with the family present. Burial will follow at Browning Cemetery in Union West community near Taylor, Mississippi. Mr. Carothers was born September 14th, 1930, near Taylor, MS, to the late Earl and Mabel Carothers. Arnold Wayne (“A.W.”) and his Father founded Carothers Construction Company, in 1956, where Arnold’s lifetime work was devoted to building. A.W. loved his work. His company built many commercial buildings in the area and throughout the U.S., including the First Baptist Church of Water Valley, where he was an active member, and where his funeral services will be held. . His son, Sean Carothers, later joined him at work and eventually took over the business. A.W., as he was known to his friends, was blessed with an alert and active mind throughout his entire lifetime, and he enjoyed his involvement in many of the business aspects of the Water Valley/Oxford communities, and beyond. He served in the U.S. Army, as a First Lt. in the Artillery Division,, as well as the local Reserves. He was a member and former President of Associated Builders and Contractors for many years. A.W.’s focus in life was to provide and care for his family and loved ones. His charitable contributions and activities were many, although he seldom sought recognition for his actions. A.W. and his wife, Mary Elizabeth, “Liz”, now deceased, had two children. A.W. is survived by his son, Sean Carothers, of Taylor, MS, his wife, Christy, and their children, Zac and Kevyn Carothers. He is also survived by his daughter, Virginia (“Ginny”) Carothers LoCoco, of Biloxi,, MS, and her husband, Joe LoCoco. A.W. Is also survived by Joe and Ginny LoCoco’s children and grandchildren, including; Nick LoCoco, his wife, Talia and sons Drew and Luke; Elizabeth LoCoco Wallace, her husband James, and daughter, Gianna; Joey LoCoco; and Michael LoCoco.

Arnold Wayne Carothers, 91, died Thursday, March 24, 2022, in Biloxi, Mississipppi, with his family around him Visitation will be Monday, March 28th, from 5:00 to 7:00 p.m. at Seven Oaks Funeral Home. The funeral service will be Tuesday,... View Obituary & Service Information

The family of Arnold Wayne Carothers created this Life Tributes page to make it easy to share your memories.

Send flowers to the Carothers family.