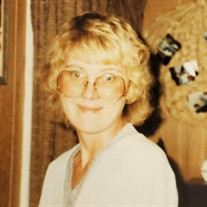 Ms. Brenda Faye Cobb (nee McCluskey), of Water Valley, MS, passed away on Tuesday, July 14th, 2020 at the age of 66, in Oxford, MS. Brenda was born to parents Herman and Eula Faye McCluskey on September 5, 1953 in Yalobusha County, MS. She grew up with her brother Larry and attended Water Valley High School. After high school, she attended secretarial school in Memphis, TN where she met her first husband. Together they had two sons and a daughter. Brenda is survived by her son, Thomas Conner of Springdale, AR, his wife and three children; Her son, Andy Conner of Springdale, AR, his wife and their daughter; A brother, Larry McCluskey of Lake City, AR, his wife Glenda; his two children and six grandchildren; her two children and six grandchildren. Brenda is preceded in death by her infant daughter, Jenny; and her parents, Herman and Faye McCluskey. There will be a small memorial service for Brenda on Friday, July 17, 2020 at 3:00pm at Seven Oaks Funeral Home, 12760 Hwy 32, Water Valley. In the spirit of Brenda's kind nature, please send flowers to Yalobusha General Nursing Home, 630 S Main St, Water Valley. We would like the residents of the home to enjoy flowers in Brenda's memory.

The family of Brenda Cobb created this Life Tributes page to make it easy to share your memories.

Send flowers to the Cobb family.