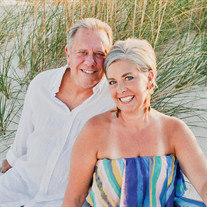 Christopher Earnest Patrick, age 59, of Long Beach, MS died unexpectedly Sunday, February 14, 2021, at Memorial Hospital in Gulfport, MS. He was born February 19, 1961, in Jackson, MS to the late James and Agnes (Luckett) Patrick. After high school, Chris attended Mississippi State where he graduated with a bachelors in engineering. After graduation, he worked extremely hard in starting his own contracting businesses in Jackson, MS. After moving to Long Beach, he owned and operated his final business, CP Homes. Chris took great pride in his work, and loved drawing and designing the homes that he built. He was the kind of man that never met a stranger, and was considered a great conversationalist. When he wasn’t working, Chris liked to spend his time boating and restoring antique cars. But nothing was any closer to his heart than his wife Mandy and their dog Peanut. Visitation is planned for Tuesday, February 23, 2021, in the Gardiner Room at Seven Oaks Funeral Home from 12:00 Noon until 2:00 PM. Services will follow at 2:00 PM in the Henry Chapel of Seven Oaks with Bro. Brandon Winters officiating. Chris is survived by his wife Mandy Patrick of Water Valley; one sister, Robin Cook of Forest, MS; sister and brother in law, Lee Ann and Kenan Stewart; one special nephew, Holt Stewart; one special niece, Maggie Stewart “The Red Rocker“; Ms. Polly Reed, his “Mimi”; as well as numerous uncles, aunts, and friends. Chris was preceded in death by both of his parents. Any memorials can be sent in Chris’ memory to: Second Chance Animal Alliance 11171 MS-315 Water Valley, MS 38965 Or First Christian Church 1020 N Main St. Water Valley, MS 38965

The family of Christopher Patrick created this Life Tributes page to make it easy to share your memories.

Send flowers to the Patrick family.