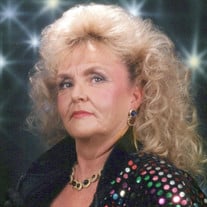 Clemmie Sue Ragon, age 77, of Water Valley, MS died Friday, November 29, 2019 at Baptist Memorial Hospital in Oxford. She was born October 14, 1942 in Banner, MS to the late Ernest and Molly (Logan) Kelly and spent her career working in factories, starting with Rice-Stix which later became Big Yank, and then eventually retired from Holley Carburetor. She, like her son, Rickey, and late husband Frankie, enjoyed messing with old cars, especially the “Mopars” Before her health deteriorated, she loved to sew and make clothes. But her greatest joy was spending time with her grandchildren. Sue was a member of Sylva Rena Baptist Church. Family will receive guests Tuesday, December 3, 2019 in the Gardiner Room at Seven Oaks Funeral Home from 5:00 PM until 7:00 PM. Services will begin at 10:00 AM Wednesday December 4, 2019 in the Henry Chapel of Seven Oaks with Bro. Shane Crawford officiating. Interment will be will be in Sylva Rena Cemetery. Sue is survived by two sons, Rickey Ragon (Donna), Keith Cobern, all of Water Valley, MS; as well as three grandchildren and 3 great-grandchildren. Along with her parents, Sue was preceded in death her husband of 50 years, Frankie Ragon; and one brother Arthur Kelly.

The family of Clemmie Sue Ragon created this Life Tributes page to make it easy to share your memories.

Send flowers to the Ragon family.