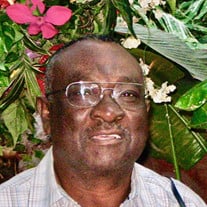 THE EARLY YEARS: Cleveland Belcher, Jr., (Jack Jr.] was born on August 9, 1943 to Cleveland Belcher Sr., (Jack) and Ivory Woodard Belcher (both deceased) in his birth town of Water Valley, Mississippi. Jack Jr., accepted Christ at a very young age and was baptized at Pinegrove Missionary Baptize Church. He attended Davidson Elementary for grade and high school. There are many stories of his younger years with him and his older sister Betty Belcher Bowman (deceased) and their shenanigans. They both would laugh out loud about the great times they had. Jack Jr. 'developed the love of taking and collecting pictures at a young age. There are memories of him with a black-n-white boxed camera hanging around his neck ready to take the right picture when he was a teenager. This hobby was a love that would last throughout his life collecting and storing thousands of pictures in his home today. He was eager to show you all of them whenever you were with him. In his younger years, through love his daughters Mary and Jean were born, with Tanya joining the family a few years later. Jack Jr. left Water Valley and moved to Los Angeles, CA, in 1962 to join his dad to start a new life. He was joined later in LA by his wife, Beulah Faye Belcher (McGee). Through this union were four children: Afarah [Tookie], Dexter, Kerry and Clevonne. THE MID YEARS: Jack Jr. started working at GTE (now Verizon/Frontier) in 1963. He moved his family to Pomona in 1970. He became a staple in the Pomona community as the neighborhood watch program president; being known as the "lawnmower man" fixing and loaning lawnmowers to the community; working with Mr. Willie White through the YMCA youth program making sure all kids in the community had Christmas trees and toys (even playing Santa Clause at a time); being known at Ted Greene Park Little League for treating the kids with pizza (win or lose) - gaining him the Outstanding Parent Support Award for Little League; he started the "Rare Breed" motorcycle club where he was president for many years; and many other positive actions in the "Islands" of Pomona. The marriage to Faye ended in 1987 after twenty-five years. T.HE LATER YEARS: " Jack Jr., (Cleve) married Marvaleen Preston Belcher in 1995. With that union came three children Niesha, LaTisha and DeuShawn. Cleve and Marva were married 23 years at the time of his passing. Cleve retired from GTE in 1999 after more than 30 years. He left a legacy at GTE of a long- haul truck driver where he drove over a million miles - that's more than twice to the moon and back! He made life-long friends and family during his time at GTE. In his later years, after his retirement, he looked forward to the annual McMahon and Woodard family reunions and loved traveling with his wife Marva. He loved being around family , especially his grandchildren. He was always willing to give unsolicited advice at any time. It has been said that "he was everyone's daddy' with his advice. Cleve, Jack Jr., is preceded in death by his parents, his brother Danny Belcher, and sisters Betty Bowman (Andy) and Dorothy "Dot" Bishop (Johnny). He leaves to mourn his current wife Marvaleen Preston Belcher: children: Mary Cross (leff), Jean Turner, Tanya Adams (Gary), Afarah Board (Cleophus), Dexter Belcher, Kerry Belcher (Susan), Clevonne Belcher, Niesha Gant (Eldred), LaTisha McDonald (Dermond), Deushawn 'Preston, (Koren); 'God-daughter, Cronnica "Too Too" , Lomack; siblingsFrank Belcher, Linda Cox (Charles}, Randy Belcher (Zandra), Ruby Turner (Joe); Uncle Clarence Belcher and Aurits Maggie McNair, Clara Lee Woodard, Martha Woodard and Inez Woodard; twenty grandchildren, six great-grandchildren, and a host of relatives, nieces, nephews, cousins, and friends. .

The family of Cleveland (Jack Jr.) Belcher created this Life Tributes page to make it easy to share your memories.

Send flowers to the Belcher family.