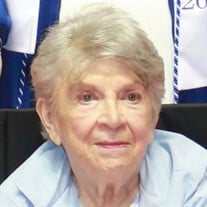 Dorothy Marie Savage, known to many as “Grandma Dot”, age 80, of Water Valley, MS passed from this life Friday, February 26, 2021, at her home surrounded by her family. She was born August 2, 1940, in Chicago, IL to the late Walter and Mary (McGrath) Wisniewski. After finishing school, Dot worked many different jobs, including the cafeteria at the hospital, the deli at Larson‘s and as a telephone operator. But nothing meant anymore to her than owning and operating “Dot’s” daycare where she had a huge impact on the later generations of Water Valley’s Children. In her spare time she loved to read, cook using her own recipes as well as those from the closet full of cookbooks she had. She will be deeply missed. Visitation is planned for Monday, March 1, 2021, in the Gardiner Room of Seven Oaks Funeral Home from 4:00 PM until 7:00 PM. Services will be at 11:00 AM, Tuesday, March 2, 2021in the Henry Chapel of Seven Oaks with Bro. Jerry King officiating. Burial will be in Camp Ground Cemetery with Mack Savage, Jacob Welch, Jagger Stovall, Justin Morris, Devante Alexander, Brady Dickey, and Austin Savage serving as pallbearers. Honorary pallbearers will be, Bo Simpson, Matt Craven, Michael Savage, Kyle Rogers, and Randy Smith. Dot is survived by two sons, Kurt Savage (Leronda) of Water Valley, MS, Keith Savage (Maria) of Paris, MS; four daughters, Colleen Craven, Suzette Dufrene, Denise Welch (Jeff), all of Water Valley, MS, Linda Savage (Bill) of Cedar Lake, IN; two sisters, Rita Preston of Chicago, IL, Carol Barnett of Wisconsin; nineteen grandchildren; twenty-one great-grandchildren; a “special family member”, Randy Smith; as well as many others that she raised and loved as her own. Along with her parents, Dot was preceded in death by one son, Kenny Savage; one grandson, Jimmy Yodual; and one brother, Johnny Wisniewski. Donations for helping with the final expenses can be made at https://fundthefuneral.com/dorothy-grandma-dot-savage

The family of Dorothy "Grandma Dot" Savage created this Life Tributes page to make it easy to share your memories.

Send flowers to the Savage family.