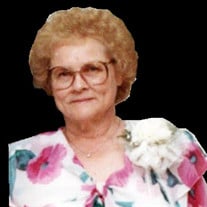 Dorothy Faye Shelly, age 91, of Batesville, MS died peacefully Wednesday, June 3, 2020 at Diversicare in Batesville, MS. She was born October 9, 1928 in Water Valley to the late William and Hellon (Ashford) Gean. While in high school, “Dot“ played on the Water Valley basketball team. She was astute when it came to her studies, which allowed her to graduate after only three years. After graduating, She married Leonard Butts, and from this union was born Richard and Donna. Later, Dot married Sonny Shelly and they began their lifelong adventures. While living in Memphis, Dot worked at Southern Shellac as the office administrator. Sometime afterwards, she began working for, and ultimately retired from, C.P. Hall where she ran the shipping department. Dot was a member of the Rebekahs in Memphis. After moving to Water Valley, Dot joined the Samaritan Rebekahs in Water Valley lodge #38. Dot found enjoyment in some of lifes simple things, such as sewing, quilting, which she learned from, and participated in, with her mother. She also had a passion for singing and playing the piano, a joy, in which, she and the residents at the nursing home, found solace. Dot loved serving her church in the WMU as well as other activities in Southland Baptist Church, then Hickory Hill Baptist Church during her years in Memphis. After moving to Water Valley, she became a member of First Baptist Church where she continued to serve until her health began to fail. Visitation is planned for Monday, June 8, 2020 at Water Valley First Baptist Church from 10:00 AM until 11:00 AM. Services will follow at 11:00 AM with Dr. Randy Bain officiating. Burial will be in Oak Hill Cemetery. Dot is survived by her husband of fifty-five years, Clyde R. (Sonny) Shelly; one son, Richard Shelly (Joanie) of Batesville, MS; one daughter, Donna McGowan of Monroe, GA; two brothers, James E. Gean (Joan) of Southaven, MS, Thomas L. Gean (Dianna) of Dupo, IL; three grandchildren; five great-grandchildren; and two great-great-grandchildren. Along with her parents, Dot was preceded in death by two brothers, William Gean Jr, Charles Russell Gean; and one sister, Martha Ann Pugh. In Lieu of flowers, memorials in Dot’s name may be made to https://www.stjude.org/ , https://www.foldsofhonor.org/ or, Halcyon Hospice 270 Power Dr, Batesville, MS 38606

The family of Dorothy Faye Shelly created this Life Tributes page to make it easy to share your memories.

Send flowers to the Shelly family.