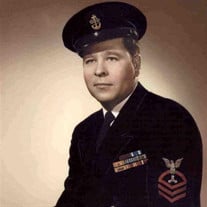 In his 95 years of life, Drayton ("Drake") Kelly Rowe eclipsed most men, and not just because he was so handsome. His jitterbug skills secured a win in many dance contests that he would enter with his sister Holly. He was a Southern chef who spent his retirement years cooking breakfasts, lunches, and holiday dinners for his entire family. He was also a consummate joker who could bring laughter to any situation. Most importantly, he had a huge heart and was a devoted husband, father, grandfather and lover of all people and animals. One of five siblings, Drake's childhood in Prattville, Alabama was marked by his family's struggle in the midst of the Great Depression. At 16-years-old, brave and in need of work, Drake joined the Navy. At first he made only $21 a month, but he would send most of it home to Mama Rowe. He eventually became a Word War II deep sea diver, diving with a hose for wreckage at Pearl Harbor. After the war, at 22, he went home to Prattville and asked his sister Angie who was left for him to marry. She set him up with "little Gladys Nelson," who was only 17 at the time and their legendary love began. Even in his 90's, Drake would recall the love at first sight he experienced when he saw Gladys walk out onto the porch for their first date. Their third date was filled with even more excitement: he got into a small car accident, causing Gladys to chip her tooth, and then he asked her to marry him. The couple, who called each other "Pootsie" and "Sniffles," eloped in 1945 and shortly thereafter moved to San Francisco where Drake was stationed. The first night in their apartment was a cold San Francisco night and the young couple had no furniture and nothing to keep warm. So, resourceful as always, Drake took down the shower curtain and they slept curled up on the floor wrapped in the plastic curtain. Drake would tell this story for years. Drake and Gladys had three children: Denise Karen Rowe, Drayton Kelly Rowe Jr., and Duke Kevin Rowe. The family lived all over the world because of Drake's naval career: San Diego, Virginia, Japan, and Mississippi. Drake served in both the Vietnam and Korean wars. After three wars and 30 years of service, he retired from the Navy as a Lieutenant Commander and he and Gladys moved back to Alabama. In retirement, Drake honed his cooking and gardening skills. He became a connoisseur of all things Western. Of course this was already a man who named his son after John Wayne, "the Duke." He cared for his dogs, Bismarck and Muffin. And, he became a grandfather to his 9 grandchildren. For many years, Drake and Gladys would drive their big white Chevy van to California several times a year to visit their grandchildren. One summer, they drove their 3 young grandchildren--Rebecca, Alexis, and Denise--across the country in that van to spend a month with grandpa and grandma. Drake refused to fly, he was a sailor. To be closer to their children and grandchildren who were all in California, Drake and Gladys eventually moved to Las Vegas. For over 30 years, Drake and Gladys filled the lives of their grandchildren with their love. They were there for every birthday and Christmas. They spoiled them all with toys and treats, jokes, and unlimited affection. They took them camping in the summer and to the snowy mountains in the winter. They raised their granddaughter Denise for a period of time when her father was at sea with the Navy. They helped raise their granddaughters Stephanie and Becky, making lunches, driving them to school, and even walking Stephanie down the aisle at her wedding. Drake Rowe died on February 2, 2019, in Oxford, Mississippi, from complications due to old age. He joins his son Drake Rowe Jr. in heaven, who died just one year ago on February 1, 2018. He is survived by his beloved wife, Gladys "Pootsie" Rowe, his children Denise and Duke, his grandchildren Rebecca, Alexis, Denise, Joshua, Stephanie, Becky, Danielle, Anna and Drayton III, his niece Ellen, and his great grandchildren Norah, Leela and Drakie. A small service will be held at the Seven Oaks Funeral Home in Water Valley, Mississippi on Sunday, February 10th at 1:00pm.

In his 95 years of life, Drayton ("Drake") Kelly Rowe eclipsed most men, and not just because he was so handsome. His jitterbug skills secured a win in many dance contests that he would enter with his sister Holly. He was a Southern chef who... View Obituary & Service Information

The family of Drayton Rowe created this Life Tributes page to make it easy to share your memories.

In his 95 years of life, Drayton (&quot;Drake&quot;) Kelly Rowe eclipsed...

Send flowers to the Rowe family.