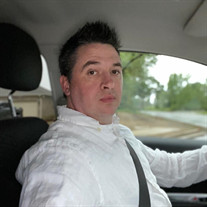 Dustin Cole Little, age 36, of Oxford, MS died Saturday, April 18, 2020 from injuries sustained in a accident in Grenada county. He was born August 14, 1983 in Grenada to Gary Little, and Jean (Burnham) Rone. After graduating from school, Dustin attended Le Cordon Bleu Culinary School in Portland Oregon. He eventually became the Executive Chef at The Chancellor‘s House in Oxford, MS where he was able to live out his passion for cooking. Dustin had many joys in his life, which included golfing, hunting, fishing, and riding motorcycles. But nothing compared to the love he had for his family. The family will be honoring Dustin with a private service at 10:00 AM, Wednesday, April 22, 2020 in the Henry Chapel of Seven Oaks with Dr. Randy Bain officiating. Committal will be in Coffeeville City Cemetery. Dustin is survived by his wife, and life partner, Skyylar (Burress) Little of Oxford, MS; one son, Josh Little; two daughters, Zoey and Astella Little; two sisters, Emily Rone of Sturgis, MS, Elaina Rone of Water Valley, MS; Mother, Jean Rone (Alan) of Water Valley, MS; Father, Gary Little (Evelyn) of Senatobia, MS; Father-In-Law, Clark Burress of Baldwyn, Ms; and Mother-In-Law, Melissa Nunn Burress of Booneville, MS. Dustin was preceded in death by one brother, Daniel Rone. Seven Oaks Funeral Home is both honored and humbled by the privilege to serve our friends and neighbors as they place their confidence in us at a most difficult time in life. As the world responds to the spreading of COVID-19, we, too, must take cautionary steps in order to continue serving our community well. Out of concern for those we serve, Seven Oaks Funeral Home will be taking the recommended precautions as we collectively face this current state of emergency. In compliance with the recent recommendations from the federal and state government as well as the CDC, we are asking everyone to support the limited gathering policies, which include limiting the number of people to 10 for visitations and services. We will also be asking everyone to also comply with the required social distancing space of six feet. Which means advising against hand-shaking, hugging, kissing and other intimate contact. This community deserves the utmost level of professionalism in funeral services as well as a funeral home that exercises attentiveness to the communal needs. These safeguards are set in place in order for Seven Oaks Funeral Home to continue providing such services and to demonstrate that attentiveness. Thank you for your understanding and patience at this time.

The family of Dustin Cole Little created this Life Tributes page to make it easy to share your memories.

Customized sympathy cards. Mailed for you.