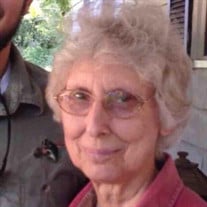 Ethel Carline Herring, age 83, of Water Valley, MS died Wednesday, August 18, 2021, at the Yalobusha General Hospital in Water Valley. She was born September 29, 1937 to the late John and Snoda (Brooks) Ross. After graduating from high school, she started her working career at the McDonnell Aircraft Corporation in St. Louis, MO. as a secretary. She continued her secretarial duties after moving to Memphis, TN at the Cardox Corp. Moving closer to home, she later went to work for the Whitten Insurance agency in Batesville, MS. Afterwards, she and Wilbur moved to Water Valley and opened Herring Ace Hardware store on Main St. After the store closed she went to work for Dr. Weeks as receptionist and insurance clerk, ultimately retiring from this position. Carline truly had a servants heart. When not making her famous fried pies or jelly, she loved serving The Lord at First Baptist Church in Water Valley where she was a member. Her service included being the treasurer for her Sunday School class, as well as working in the kitchen on Wednesday nights. She was also a member of the Gideon's Ladies Auxiliary. Cooking was a passion, as was quilting; activities for which she won many awards. She also enjoyed raising a garden with her husband Wilbur and canning the fruits of their labor. When she found free time from all of her other activities, she loved to paint and host the Ross Family reunions. Visitation is planned for Saturday, August 21, 2021, in the Gardiner Room at Seven Oaks Funeral Home from 1:00 PM until 3:00 PM. Services will immediately follow at 3:00 PM in the Henry Chapel of Seven Oaks with Dr. Randy Bain officiating. Burial will be in Mt. Liberty Cemetery. Carline is survived by her husband of sixty-three years, Wilbur Herring of Water Valley; one son, Shannon Herring (Tonya) of Jonesboro, AR; one daughter, Kim Kidd of Oxford, MS; six grandchildren, Tyler Jones, Kyle Jones (Megan), Brock Kidd, Haley Hays (Jared), Dallas Herring, Cooper Herring; three great-grandchildren, Stevie Ray Hayes, Rhett Hayes, Hardin Jones; as well as a host of nieces and nephews. In addition to her parents, Carline was preceded in death by three brothers, Floyd Ross, Delbert Ross, Edward Ross; and two sisters, Wanda Ross, and Lucille Wrenn.

The family of Ethel Carline Herring created this Life Tributes page to make it easy to share your memories.

Send flowers to the Herring family.