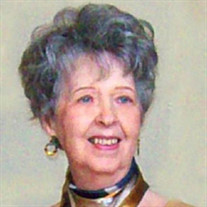 Gloria Willene King went Home on July 9, 2020, to reside in spirit with the Lord Jesus Christ until His second advent, when she will receive an immortal body and reside on the Creator’s new and eternal Earth. She was born on November 13, 1936, in Bassfield, Mississippi to Homer and Virsie Lea (Matheny) Quick. After the death of her father when Gloria was a toddler, Gloria's mother married S. L. Bell, Jr., of Water Valley. His work with the Tennessee Valley Authority carried the family to Tennessee, Alabama, North Carolina, New York, and Texas. When Gloria was eleven years old, the family moved to Water Valley. After attending the fifth grade at Camp Ground, Gloria entered the Water Valley school system for the remainder of her elementary and high school years. She and Ersel were childhood sweethearts, considered by classmates to be a pair going all the way back to the sixth grade. She attended the Mississippi State College for Women for two years and then transferred to Ole Miss. After her junior year, she and Ersel married. Upon Ersel's graduation from Ole Miss and during his subsequent work with International Paper Company, she and Ersel and their daughters lived in Arkansas, Alabama, and Louisiana. In 1978 Gloria and her family moved back to Water Valley where Ersel assumed ownership of King's Furniture shortly after his father retired from the business. Gloria and Ersel operated the business until they retired in 2002. A talented seamstress, Gloria made her own wedding dress after seeing a picture of it in a magazine. Gloria was a long time member of the Town and Country Garden Club. She loved making flower arrangements for her home and for display at garden club meetings. An avid bridge player, she enjoyed her membership in two local bridge clubs. Gloria was a faithful and active member of the First Presbyterian Church where she had served on numerous committees and as President of the Women in the Church. Gloria made Birmingham, Alabama her home for the past two and one-half years, where she attended Altadena Valley Presbyterian Church, with her daughter, Lea Anne. Gloria continued to play bridge, joined a community book club, and lead a very active and happy social life. Gloria is survived by two daughters, Lea Anne Parker (Barry) of Birmingham, Alabama, and Laura Kay Burbank (Steve) of Franklin, Tennessee. She leaves three grandsons, Nathan Burbank, Andrew Burbank and Preston Burbank. In addition to her parents and stepfather, she was preceded in death by her husband of fifty-seven years, Carmon “Ersel” King, Jr., and an infant son, Steven Ersel King. Interment will take place Tuesday, July 14, 2020, in Oak Hill Cemetery at 10:00 AM, with visitation to follow at the First Presbyterian Church of Water Valley from 11:00 AM until 12:00 Noon. Services will follow at 12:00 PM with Bro. Harold Spraberry officiating. Memorials may be sent to Graceworks Ministries https://www.graceworksministries.net/ (Franklin TN) and Lifeline Children's Services https://lifelinechild.org/ (Birmingham AL) for the furtherance of the Gospel. Seven Oaks Funeral Home’s number one priority during these unprecedented times, is the health of our staff, our families, our visitors, and our community. With this in mind, we are adhering to guidelines set forth by the CDC, Gov. Tate Reeves, and the Mississippi Department of Health. At this time, we are asking everyone to support the limited gathering and visitation policies mandated by our government officials, which include a maximum of 50 people in the funeral home, or alternate place of service, at one time for visitations and funerals, or 100 people at graveside services. We are also asking everyone to comply with the required social distancing space of six feet, as well as advising against intimate contact such as hand-shaking, hugging, and kissing. Although it is not presently required, we are encouraging the use of face masks.

Gloria Willene King went Home on July 9, 2020, to reside in spirit with the Lord Jesus Christ until His second advent, when she will receive an immortal body and reside on the Creator&#8217;s new and eternal Earth. She was born on November... View Obituary & Service Information

The family of Gloria Willene King created this Life Tributes page to make it easy to share your memories.

Send flowers to the King family.