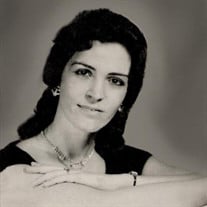 Grace Maldene White, age 83, of Water Valley, MS died peacefully Monday, April 27, 2020 at her home with family by her side. She was born September 6, 1936 in Water Valley to the late Mr. & Mrs. Willie Williams. In high school, Grace loved sports, and won the Women’s High School Athletic Award. After graduating school, She and Bo married and began their adventures traveling around the world while Bo served in the Navy. While in Spain, Grace found a new hobby in bowling. She eventually became a member of the Southern Mix Bowling team, and bowled in 37 national women’s tournaments. She also loved golfing, and sewing, but her greatest love was her family. After settling back in Water Valley, she worked at Holley Carburetor, and retired after fifteen years. She was a member of Bethel Baptist Church. The family will hold a private family service Wednesday, April 29, 2020 in the Sylva Rena Church Cemetery at 2:00 PM with Bro. Shane Crawford officiating. Grace is survived by her husband of sixty five years, Henry (Bo) White; one son, Bodie White (Gloria) of Water Valley; two daughters, Deborah Blackwell (Lance) of Shepherd, TX, and Cheryl Mims (Mark) of Lopeville, TN. Along with her parents, Grace was preceded in death by one grand-daughter, Korah Grace White.

The family of Grace Maldene White created this Life Tributes page to make it easy to share your memories.

Send flowers to the White family.