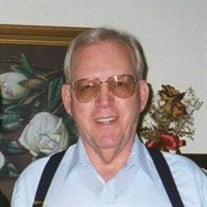 James Stevens Allen, age 90, of Water Valley, MS died peacefully Saturday, September 14, 2019 at Baptist Memorial Hospital in Oxford, MS. He was born September 27, 1928 in Coffeeville, MS to the late Samuel and Elizabeth (Hollingsworth) Allen. After high school, Jim joined the Air Force and served twenty three years which included the Korean War. During this time, he was a founding member of “The Association of the Office of Special Investigations” which is a U.S. federal law enforcement agency that reports directly to the Secretary of the Air Force. After retiring from the service, Jim studied at Baptist College in Charleston, South Carolina where he received a Bachelors of Religious Education in 1976, and then continued his education at New Orleans Baptist Theological Seminary where he earned a Masters of Divinity in 1980. Jim was a life member of VFW Post 4100 in Water Valley, and was also a member of First Baptist Church in Water Valley. Visitation is planned for Wednesday, September 18, 2019 in the Gardiner Room at Seven Oaks Funeral Home from 5:30 PM until 7:30 PM. Services will begin at 10:30 AM Thursday, September 19, 2019 in the Henry Chapel of Seven Oaks with Bro. Brian Able and Bro. Derek Starnes officiating. Burial will be in Oak Hill Cemetery in Water Valley. Jim is survived by his wife of sixty five years, Alice Allen; two sons, Marc Allen of Pearl, MS, and William Allen (Tammy B.) of Warner Robins, GA; as well as seven grand children, and 5 great-grandchildren. Along with his parents, Jim was preceded in death by by two brothers, Will Allen, and Samuel Allen; and three sisters, Leona Allen, Annie Lamar, and Ollie Johnston. In Lieu of flowers, the family asks that any memorials be made to the Disabled American Veterans at 1494 S Veterans Memorial Blvd, Tupelo, MS 38804

The family of James Stevens Allen created this Life Tributes page to make it easy to share your memories.

Send flowers to the Allen family.