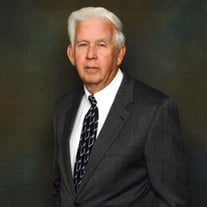 James Douglas "Doug" Kelly, age 83, died peacefully at his home in Water Valley, MS surrounded by his family. Doug was born September 11, 1937 to the late Elmer Newton Kelly and Blanche Riley Kelly in Sunflower County, MS where he lived and worked for many years. He was a cryptographer in the U S Army and earned a degree in accounting from MS Delta Community College. Doug was married to Bernice Turner Kelly and worked 40 years in the agricultural equipment business, spending the last 15 years before retirement selling parts and equipment for Wade Incorporated. He also bought, repaired and refurbished tractors and sold them as a side hobby. He was a member of First Baptist Church in Water Valley, but had served as a deacon for 30 years prior at Roundaway Baptist Church in the Mississippi delta. Doug owned a sawmill, among his other hobbies, but his hobbies paled in comparison to his love and pride he had for his family. Visitation is planned for Monday, November 9, 2020 from 10:00 AM until service time at Seven Oaks Funeral Home. Funeral services will begin at 12:00 Noon in the Henry Chapel of Seven Oaks with Dr. Randy Bain, Bro. Leon Holly, and Dr. Eddie Conner officiating. Burial will be in Anchor Church Cemetery in Lafayette County. In addition to his parents, Doug was preceded in death by a son, James "Jimmy" Douglas Kelly, Jr. and a brother, Riley Kelly. He is survived by his wife of 63 years, Bernice Turner Kelly of Water Valley, MS; two daughters, Rebecca "Becky" (Michael) Watts of Oxford, MS and Tracey (Jarmon) Ables of Crowley, LA; one son, Dr. Steven (Hope) Kelly of Orlando, FL; one brother, Ralph Kelly of Drew, MS; five grandchildren; and 6 great grandchildren.

The family of James Douglas "Doug" Kelly created this Life Tributes page to make it easy to share your memories.

Send flowers to the Kelly family.