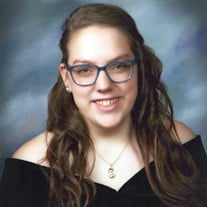 Jarah Sheyenne Spence, age 21, of Water Valley, MS transitioned to her eternal home Tuesday, January 19, 2021. She was born September 8, 1999, in Oxford, MS to Scott and Kimberly (Dickey) Spence. After graduating Water Valley High School, she went on to North West Community College where she graduated with a Associates of Science in criminal justice. With her knack for talking, Jarah was lovingly described as a great communicator. She was a member of Adonai Church in Water Valley where she served the hearing impaired by signing the services. Everyone who knew her, knew she had somewhat of an obsession with ketchup. She also loved anything Stars Wars, Reba McEntire, LSU football, and the New Orleans Saints. But nothing compared to the love she had for her brothers and her “babies”. Visitation is planned for Wednesday, February 3, 2021, in the Gardiner Room at Seven Oaks Funeral Home from 4:00 PM until 7:00 PM. Services will be Thursday, February 4, 2021 at 10:00 AM in the Henry Chapel of Seven Oaks with Bro. Roger Howell officiating. Burial will be in Tishomingo Cemetery in Tishomingo, MS with Cody Hadley, Colin Hadley, Brady Dickey, Kyle Spence, Cooper Hadley, and Frank Hernandez serving as pallbearers. Honorary pallbearer is Cameron Hadley. Jarah is survived by her parents, Scott Spence of Water Valley, MS, and Kim Dickey Spence of Batesville, MS; two brothers, Jacob Spence of Sardis, MS, Joshua Sullivan (Krystal) of San Diego, CA.; her grandparents, Clara Spence of Water Valley, MS, and Patricia and Clyde Spencer of Sardis, MS; one niece, Layla; numerous aunts and uncles; and many special teachers. Jarah was preceded in death by grandfathers, Danny Dickey and James Edward Spence; as well as her great grandmother, Lennie Mae Dickey. Donations towards Jarah's service can be made at https://fundthefuneral.com/jarah-sheyenne-spence

The family of Jarah Sheyenne Spence created this Life Tributes page to make it easy to share your memories.

Send flowers to the Spence family.