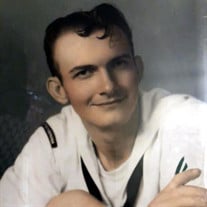 Jearl Wayne Zachery, age 81, of Coffeeville, MS went to his forever home Tuesday, March 8, 2022, at Baptist Memorial Hospital in Oxford, MS. He was born February 12, 1941, in Leachville, AR to the late Clarence and Mattie (Rollins) Zachery. Jearl was a man that enjoyed working and helping others. He left school to join the United States Navy, and served upon the USS Ticonderoga aircraft carrier. After finishing his service to our nation, Jearl came home and began farming for a time. He then began a career at Sears where he learned about working on appliances. Later he started his own business applying the knowledge he gained. A job he worked at for forty years until he retired. When not working or lending a helping hand, Jearl had a tremendous passion for hunting and fishing. Visitation is planned for Saturday, March 12, 2022, at Oakland Baptist Church from 1:00 PM until 2:00 PM. Services will immediately follow at 2:00 PM with Bro. Jimmy Hood officiating. Burial will be in Oakland Cemetery. Jearl is survived by his wife of 58 years, Nancy Zachery; one daughter, Teresa Wyatt of Coffeeville, MS; one brother, Tommy Dearl Zachery of Mena, AR; four sisters, Dorothy Pearl Morris of Flint MI, Frances Henry of Jonesboro, AR, Marilyn Pinkerton of Ridgeland, MS, Jackie Zachery of Swartz Creek, MI; as well as a host of nieces and nephews. Along with his parents, Jearl was preceded in death by one brother, Clarence Earl Zachery; and one sister, Myrl Zachery.

The family of Jearl Wayne Zachery created this Life Tributes page to make it easy to share your memories.

Send flowers to the Zachery family.