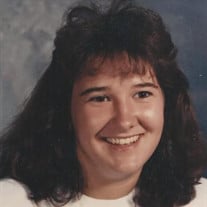 Jennifer Hughes Gossett, age 45, of Oxford, MS died Monday, November 19, 2018 at Oxford Health and Rehab Center. She was born September 27, 1973 in Memphis, TN to the late John and Linda Faye Hughes. Before her illness, Jennifer worked numerous positions at Baptist Memorial Hospital in Oxford, MS. She had a passion for photography, but nothing compared to the enjoyment she received from her family and friends. Visitation is planned for Friday, November 23, 2018 at Seven Oaks Funeral Home from 10:00 AM until 12:00 Noon. Services will begin at 12:00 Noon in the Henry Chapel of Seven Oaks with Bro. Sammy Gossett officiating. Burial will be in Pontotoc Memorial Park with Barry Gossett, Hunter Gossett, Andy Gossett, Jeff Hudson, Tim Russell and Steve McCain serving as pallbearers. Jennifer is survived by her husband, Chris Gossett; one daughter Lindley Gossett both of Water Valley, MS; one sister Jessica Hughes; one brother, Chris hughes; One Grandmother, Thelma Raby; and two Uncles, Jerry L. Raby and family, and Levi Raby and family. Along with her parents, Jennifer was preceded in death by her grand parents, John L. and Virginia Hughes, and J. W. Raby.

The family of Jennifer Gossett created this Life Tributes page to make it easy to share your memories.

Send flowers to the Gossett family.