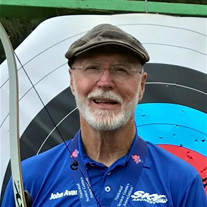 Not sure what to send?

John David Avant, 72, of Water Valley, Mississippi, went home to be with his Lord and Savior Jesus Christ on June 22, 2022. John was born on January 12, 1950 to James Louis and Shirley Jenkins Avant. As a son, husband, father, grandfather, brother, and friend, John spent most of his time caring for and serving those around him. He enjoyed baking for those he loved, and frequently filled his truck with pies and cookies to deliver to friends. After graduating high school, John attended Northwest Community College, where he was a member of the track team as a pole-vaulter. Later, he spent time in the Pacific Northwest fighting fires, before returning home to marry his high school sweetheart, Janice Whitten, and begin a career in construction. In 1984, he founded Avant Construction, which allowed him to do one of the things he loved most - spend every day working alongside his best friend: his son. He endeavored to teach his daughter every skill he knew - instead of just taking care of things for her - in order to help encourage her independence. As a grandfather, John was present in all of his granddaughters’ most precious memories. He bought his favorite law student her first suit, danced with his curly-headed granddaughter at her wedding to his new grandson, and delighted in every track meet and fishing tournament the youngest participated in. John loved his daughter-in-law like his own. He was also incredibly proud in the knowledge that he could beat his best friend, Bud Trout, in anything they did. John’s example of love and service was a testament to his faith in Christ. He served as a deacon and Sunday School teacher at First Baptist Church in Water Valley, the church his family has faithfully attended as members for decades. He loved completely, served faithfully, and prayed constantly. John is preceded in death by his parents, James and Shirley Avant; a brother, Jim Avant; and sisters, Freda Morgan and Doris Smith. Left to cherish his memory are his wife of almost 52 years, Janice Avant; his two children, Johnny (Missy) Avant of Water Valley, MS and Stacey Avant of Hoover, AL; and his three grandchildren, Ally Avant of Oxford, MS, Anna Mills (Reed) Tyler of Jonesboro, AR, and Parker Avant of Water Valley, MS; his brother Tom (Margie) Avant of Navasota, Texas. The funeral service will be held at First Baptist Church of Water Valley (800 Main Street, Water Valley, MS, 38965) on Saturday, June 25, 2022 at 12:00 pm. The family will receive friends and visitation two hours prior to the service, starting at 10:00 am, Saturday at the church. In lieu of flowers, the family requests memorial donations be made to Special Olympics Mississippi in Jackson, Mississippi. https://specialolympicsms.org/

John David Avant, 72, of Water Valley, Mississippi, went home to be with his Lord and Savior Jesus Christ on June 22, 2022. John was born on January 12, 1950 to James Louis and Shirley Jenkins Avant. As a son, husband, father, grandfather,... View Obituary & Service Information

The family of John David Avant Sr. created this Life Tributes page to make it easy to share your memories.

Send flowers to the Avant family.