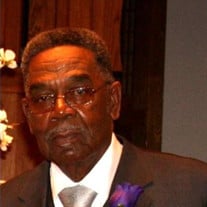 John Henry Hawkins, age 85, of Water Valley, MS departed this life Friday, February 26, 2021, at Baptist Memorial Hospital in Oxford, MS. Being born May 22, 1935, John was one of four children, and the only son born to John Henry Sr. and Dena (Morgan) Hawkins. John confessed a hope in Christ at the early age of nine years old by the Rev. E.C. Davidson at Kind Providence and was placed in a man’s shoes at the early age of 15 to help provide for the family due to the untimely death of his father. He was drafted into the United States Army but was later discharged early due to being his parents only son. John loved, and was a faithful member of New Providence Missionary Baptist Church in Water Valley, where he served The Lord as a deacon and the church clerk. He also served as a board member of the Mt. Moriah District Association, as well as being a member of the Masonic Lodge. John retired at the age of 70 as a scheduler, after a forty-two year career at Borg Warner. His hard work did not go unrecognized, as he was the first African American Man to be moved to a salary position at Holley Carburetor. No matter where you went, you would find John with a cigar in his hand, which was one of his pleasures in life. He also enjoyed gardening, and working with his flowers. But absolutely nothing was more important to him than his family, which he loved dearly. A wake is planned in John’s memory Friday, March 5, 2021, in the Gardiner Room at Seven Oaks Funeral Home from 3:00 PM until 6:00 PM. A private graveside service will be held for the family due to Covid-19. On May 19, 1958 John was united in holy matrimony to Earline Wright and to this union nine children were born, thus leaving behind to honor his memory six sons, Larry Hawkins (Ingrid) of Deining Germany, John H. Hawkins III of Cincinnati, OH, Levert Hawkins (Patricia), Ray Hawkins (Kathleen), Rev. Calvin Hawkins (Mary), all of Water Valley, MS, Perry Hawkins (Mike) of Columbus, GA; three daughters, Patricia Reed (John), Mona Hervey (James) all of Water Valley, MS, Virginia Lewis (Stan) of Alabaster, AL; twenty-one grandchildren; nineteen great-grandchildren; and one special grand-daughter, Delita White; one special nephew, Arthur Smith, whom he was the caregiver and was raised like brothers; and a host of nieces and nephews and special friends. As well as his parents, John was preceded in death by his wife of fifty-three years, Earline Hawkins; three sisters, Zola Price, Dollie Henderson, and Delia Jenkins.

John Henry Hawkins, age 85, of Water Valley, MS departed this life Friday, February 26, 2021, at Baptist Memorial Hospital in Oxford, MS. Being born May 22, 1935, John was one of four children, and the only son born to John Henry Sr. and Dena... View Obituary & Service Information

The family of John Henry Hawkins created this Life Tributes page to make it easy to share your memories.

Send flowers to the Hawkins family.