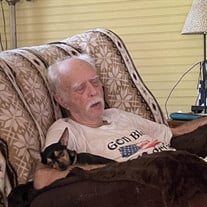 Larry Wayne Hipps, age 77, of the Union West Community, went to his forever home, Tuesday, March 8, 2022, at Baptist Memorial Hospital in Oxford, MS. He was born June 14, 1944, in Oxford, MS to the late Homer and Altia (Tatum) Hipps. After graduating from high school, Larry continued his education at North West Community College where he received a degree in engineering. Larry put that knowledge to work when he started his 35 year career with the Mississippi Department of Transportation. Larry enjoyed working, and after retirement from MDOT, he became a driver for Belk Ford in Oxford, and then worked security at Taylor Grocery. Larry also had a passion for serving his community, which he did as a volunteer for twenty years at the Taylor Fire Department, and then became Chief at the Union West Fire Department. Larry was also a beloved member of Union West Baptist Church. When Larry wasn’t working or volunteering, he loved coon hunting, gardening, and animals in general, especially his pets, which included his pet cows. But nothing meant more to him than his family, with a special love for his grandchildren. Visitation is planned for Friday, March 11, 2022, in the Gardiner Room at Seven Oaks Funeral Home from 1:00 PM until 3:00 PM. Services will immediately follow at 3:00 PM in the Henry Chapel of Seven Oaks with Bro. Roger Howell officiating. Burial will be in Browning Cemetery. Larry is survived by his wife of 29 years, Sandra Hipps; two sons, Stewart Skelton (Jackie) of Red Banks, MS, Steven Skelton (Jenni) of Ingomar, MS; one daughter, Jennifer Westmoreland (Chris) of Water Valley, MS; thirteen grandchildren; and five great-grandchildren. As well as his parents, Larry was preceded in death by one grand son, Noah Smith.

The family of Larry Wayne Hipps created this Life Tributes page to make it easy to share your memories.

Send flowers to the Hipps family.