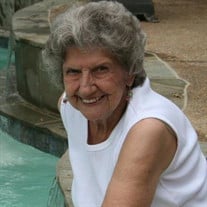 Lilly Loyce Horan, age 89, of Water Valley died peacefully with family by her side on Monday, January 13, 2020. Known to most friends and family as “Lou”, she was born September 24, 1930 in Water Valley to the late James and Aileen (McCulley) Bell. She married Benjamin F. Horan in 1952 and together they lived and raised their six children in Water Valley during their 67 years of marriage. Lilly is survived by her brother Larry Bell (Rachel) and sister, Carol Bell Brown (Breck), both of Water Valley, and 5 sons Michael Horan (Patsy) of Hattiesburg, MS, Brennan Horan of Southaven, MS, Clay Horan (Debbie) of Senatobia, MS, Kevin Horan (Clarissa) of Grenada, MS, and Sean Horan (Melissa) of Denver, CO. She was preceded in death by Ben, (2019), her dear daughter, Kim Horan Bruner (2016) and her youngest brother Sonny (Ding Dong) Bell. Lilly and Ben were the proud grandparents to 21 grandchildren and 6 great grandchildren, with one on the way. Although she would never admit it, one of Lilly’s great joys was having the most number of family members present with her at the First Christian Church where she was a life-long member. She was a member of the Junior Auxiliary, and the Town Talk Rook Club. Some of Lilly’s oldest and dearest lifelong friends regularly joined her for monthly Rook Club play. Lilly was a 1948 graduate of Water Valley High School and was actively involved in many extracurricular clubs and organizations including the paper and annual staff and was a class officer. She was an active member of the Water Valley community, opening and operating the first pre-school - the Water Valley Kindergarten from 1963 to 1976. In her early years she spent many nights and days attending football, basketball and baseball games involving her six children. For a span of about 14 consecutive years there were Horan children involved in Water Valley High School sports, and she and Ben were always attending and cheering on the Devils. Lilly served as a trustee on the Water Valley School Board during the 70’s and 80’s. Later in life Lilly was a fixture in the Yalobusha County Chancery Clerk’s office for 23 years, a job she thoroughly enjoyed - serving as a clerk for Bobby Clark until retiring under the service of Amy McMinn. It is believed Lilly was one of the only persons to ever have more than one retirement party held in her honor at the courthouse. Lilly’s true passion in life was her family and her friends. She always had a genuine smile and kind word for friends and strangers alike. Throughout her life, Lilly was at her happiest when she was surrounded by children in her home. She was known for her Christmas get-togethers with family and friends and day-long Easter hunts. She loved having guests and delighted in telling “one more story” as we all began to depart. We will miss those stories almost as much as we will miss her. She was truly the matriarch for the Horan Family. Visitation is planned for Friday, January 17 at Seven Oaks Funeral Home from 5:00 until 7:00 p.m. Services and a celebration of Lou’s beautiful life will begin on Saturday, January 18 at 11:00 a.m. at Seven Oaks with Brother Jerry Holt officiating. Burial will be in Oak Hill Cemetery on Tuesday, January 21, 2020 at 10:00 am. The family requests that in lieu of flowers, memorials be sent in Lilly’s honor to First Christian Church of Water Valley, Lustgarten Foundation for Pancreatic Research, or Batson Children’s Hospital in Jackson

The family of Lilly Loyce (Bell) Horan created this Life Tributes page to make it easy to share your memories.

Send flowers to the Horan family.