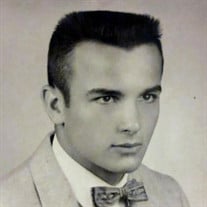 Loyd David Green, age 82, of Southaven, MS went to his eternal home Saturday, June 18, 2022, at his home with his family by his side. He was born November 30, 1939, in Love, MS to the late Ernest and Lois (Landreth) Green. In school, Loyd was well known and respected, obtaining many recognitions including most hansom. During his high school years Loyd excelled in his studies, and was very gifted in math. He also played football for Coach Bob Tyler where he was team captain, and held many performance records. After graduating as his class salutatorian in 1958, Loyd attended Ole Miss for a short while before heading to Arkansas to work on the construction of Greers Ferry Dam. After returning home, he began his life long career with the Illinois Central Railroad, starting at the bottom and working his way up the ladder to become an engineer. A job he would retire from after forty years. He was a member of the Brotherhood of Locomotive Engineers and enjoyed talking shop with his buddies. When not riding the rails, and as a Manning family fan, he continued to enjoy football by watching Ole Miss and the Colts. Loyd also loved performance automobiles, cooking, eating and growing a garden. Visitation is planned for Thursday, June 23, 2022, in the Gardiner Room at Seven Oaks Funeral Home from 11:00 AM until 12:00 Noon. Services will immediately follow at 12:00 PM in the Henry Chapel of Seven Oaks with Bro. Billy Childs officiating. Burial will be in Oak Hill Cemetery. Loyd is survived by his wife, Betty Jane Green; two sons, Thomas David Green of Indianapolis, IN, Michael Kennon Green; one daughter, Christy Renee Renfro of Southaven, MS; three grandchildren, Owen Thomas Green, Evelyn Alexis Renfro, Christopher Dakota Green; two great-grandchildren; and one sister, Catherine Taylor of San Antonio, TX. As well as his parents, Loyd was preceded in death by two brothers, E.T. “Ted” Green, and Thomas Green; and mother to his children, Gwendolyn Ann Green.

Loyd David Green, age 82, of Southaven, MS went to his eternal home Saturday, June 18, 2022, at his home with his family by his side. He was born November 30, 1939, in Love, MS to the late Ernest and Lois (Landreth) Green. In school, Loyd was... View Obituary & Service Information

The family of Loyd David Green created this Life Tributes page to make it easy to share your memories.

Send flowers to the Green family.