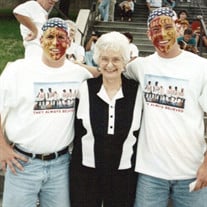 Lucy (Emma Lou) Person Coleman passed away at the age of 91 on Wednesday, June 9, 2021. She was born on July 26, 1929 to Thelma Whalen Person and P.C. Person. Lucy left behind one daughter, Linda Coleman Griffin (Paul). She was preceded in death by her husband, Sammy Benford (Sam) Coleman, and her son, Ronald Gordon Coleman. She is survived by one brother, P.C. Person of Panama City, Florida, one sister Dot (Person) Rudy of Wentzville, Missouri, numerous nieces, nephews, and cousins, and many friends. Lucy met the love of her life Sam at Jeff Davis in Water Valley, married him after high school, and they welcomed a son Ron. After Sam was honorably discharged from the United States Air Force, they moved to Oxford for Sam to pursue his college and graduate studies at Ole Miss. Lucy lovingly cared for her husband, their son, and later a daughter, through these years at Ole Miss. Upon receiving “their” Master’s degree, the family, moved to New Orleans in 1957, and enjoyed a good life raising children and working hard. Yet, Lucy’s life after this time may be summed up quite well by the first verse of Vince Gill’s famous song “Go Rest High on The Mountain”: I know your life On earth was troubled And only you could know the pain You weren’t afraid to face the devil You were no stranger to the rain. Because, unfortunately, Sam was taken from Lucy swiftly, yet painfully, in May,1975; further, her son Ron was torn from her side ten years later, again exacting much pain. These were tragedies from which Lucy never really recovered. But Lucy was a woman of great strength and fortitude, and she definitely was not afraid to stare down any devil! Lucy had another great love, which was cooking, a testament to which is that she won first place in the baking contest at the Peach Festival in Ruston, Louisiana in 1977. Her winning Peach Cake was even featured on the cover of an issue of Southern Living that year. Unfortunately, Lucy’s love of baking was also taken from her during the last year of her life by dementia. About six months ago, Lucy told her daughter that her oven in her apartment at Elmcroft in Oxford, where Lucy resided the last seven years of her life, was broken; but, of course, it was not broken- after a slight mishap when some muffins burned, the stove had been unplugged. Lucy told her daughter many, many times during the last six months of her life how very much she missed baking, especially baking goodies for the staff and residents of Elmcroft- Oxford. Nevertheless, Lucy’s daughter is positive that her Mother has gone to a huge test kitchen in Heaven and is conducting cooking demonstrations like the angels have never seen. Visitation will be held Sunday, June 13, 2021, in the Gardiner Room at Seven Oaks Funeral Home from 3:00 PM until 5:00 PM. A graveside service will be held Monday, June 14, 2021 at the Bethlehem Cemetery in Velma at 2:00 PM with Bro. Fletcher Moorman officiating. In Lieu of flowers, please consider making a donation to the Alzheimer’s Association (www.alz.org) or mailing donations to PO Box 96011, Washington, D.C. 20090-6011

Lucy (Emma Lou) Person Coleman passed away at the age of 91 on Wednesday, June 9, 2021. She was born on July 26, 1929 to Thelma Whalen Person and P.C. Person. Lucy left behind one daughter, Linda Coleman Griffin (Paul). She was preceded in death... View Obituary & Service Information

The family of Lucy Person Coleman created this Life Tributes page to make it easy to share your memories.

Lucy (Emma Lou) Person Coleman passed away at the age of 91 on...

Send flowers to the Coleman family.