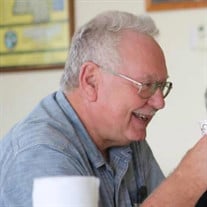 Morris Clifton Surrette, age 71, of Water Valley, MS died Tuesday, March 24, 2021, at his home surrounded by his family. He was born March 24, 1950, in Water Valley to the late George and Lorene (Shearer) Surrette. Morris was a man that never shied away from work. After graduating from high school, he worked on a pipeline for a while, but his first career began with Colonial Bread Company in Meridian, MS as a route driver, and retired twenty-two years later as the supervisor of the bakery. After moving back to Water Valley, he went to work for the city embarking on a twenty-five plus year career overseeing the city’s water supply. He had many joys in his life. They included being an avid Ms. State fan, working in the garden, woodworking, bird watching, and walking in the woods taking in nature. But nothing brought more happiness to his life than his family which he loved unconditionally. Visitation is planned for Saturday, March 27, 2021, in the Gardiner Room at Seven Oaks Funeral Home from 11:00 AM until 1:00 PM. Services will follow at 1:00 PM in the Henry Chapel of Seven Oaks with Bro. Darrell Surrette officiating. Burial will be in Sylva Rena Cemetery. Morris is survived by his wife of forty-two years, Helen Surrette; two sons, Cameron Surrette (Iris), Byron Surrette (Brandi), all of Water Valley; one daughter, Pricilla Dingler (Donnie) of Panama City Beach FL; four brothers, Butch Surrette (Ann) of Water Valley, Joe Surrette (Karen) of Greenwood, MS, John Surrette (Vickie) of Pontotoc, MS, Kevin Surrette of Conyers, GA; and seven grandchildren, Payden Surrette, Emaleigh Smith, Melondi Surrette, Lilyann Surrette, Jon Surrette, Matt Surrette, and Ben Surrette. Morris was preceded in death by both of his parents, as well as one brother, Murray Surrette.

Morris Clifton Surrette, age 71, of Water Valley, MS died Tuesday, March 24, 2021, at his home surrounded by his family. He was born March 24, 1950, in Water Valley to the late George and Lorene (Shearer) Surrette. Morris was a man that never... View Obituary & Service Information

The family of Morris Clifton Surrette created this Life Tributes page to make it easy to share your memories.

Send flowers to the Surrette family.