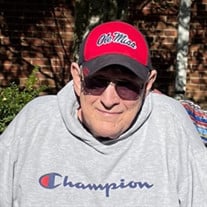 Paul Wayne Jobe, age 71, of Water Valley, MS passed away on Friday, February 25, 2022 at Baptist Memorial Hospital in Oxford, MS surrounded by family and friends. He was born September 10, 1950 in Bruce, MS to the late James Ellis Jobe and Eva Bowles Jobe Vanlandingham. Paul served in the United States Navy during the Vietnam era from 1968 through 1970. He attended Bruce High School and Northwest MS Junior College where he received an associate of applied science degree in 1984 and was selected Outstanding Engineering Technology Student of the Year. Before his retirement, Paul was employed by Guardian Pest Control for many years. He spent the past four years as a resident of the MS State Veterans Home in Oxford, MS where he enjoyed ‘harassing’ and playing practical jokes on the loving staff. Visitation will be held at Seven Oaks Funeral Home on Monday, February 28, 2022 from 12 noon until 2:00 PM. Funeral service will follow immediately at 2:00 PM in the Henry Chapel of Seven Oaks with Bro. Fletcher Moorman officiating. Pallbearers will be Tripp Edwards, Brad Jackson, Jerry Turner, Steve Edwards, and Mike Edwards. Honorary pallbearers will be Tommy Edwards, Sam Goodwin, and Staff Sargent William W. Ginn, US Air Force. In addition to his parents, Paul was preceded in death by his brothers, Dudley Jobe of Spokane, WA, Roy Jobe of Bruce MS, and James Ellis Jobe, Jr. of Derma, MS; and a nephew, Roy Wayne Jobe of Bruce, MS. He is survived by one sister, Lisa Jobe Swanson of Tupelo, MS; his former wife and friend, Nell Jobe of Water Valley, MS; a special niece, Tracie Jobe Jordan of Vardaman, MS; a very special nephew, Tripp Edwards (Kelsey) of Pontotoc, MS; and a host of other relatives and friends.

The family of Paul Wayne Jobe created this Life Tributes page to make it easy to share your memories.

Send flowers to the Jobe family.