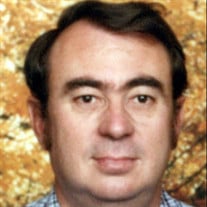 Raymond Hall Pullen Jr. better know as “TInker“, age 73, of Walls, MS died Tuesday, June 30, 2020, at Baptist Memorial Hospital in Oxford, MS. He was born April 25, 1947, in Water Valley to the late Raymond Sr. and Vera (Wilbourn) Pullen. After graduating from high school, Tinker embarked on his career working on the railroad. He began as a brakeman and worked his way up to engineer. A couple of the famous runs he engineered were the Panama Limited, as well as the City of New Orleans. In 2009 Tinker retired from the Canadian National (CN) after forty years. People who knew him, knew, that even in his “off” time, he loved to work. He sold used cars, installed siding, and had rental property. But when he did take leisure time, he took his family traveling to see the beauty in our nation's national parks. When it was said and done, he was able to say that he had traveled to all 48 of the continental United States. Visitation is planned for Monday, July 6, 2020, in the Gardiner Room at Seven Oaks Funeral Home from 11:00 AM until Noon. Services will immediately follow at 12:00 PM in the Henry Chapel of Seven Oaks with Bro. Shane Crawford officiating. Burial will be in Oak Hill Cemetery. Tinker is survived by two sons, Andy Pullen of Clarksdale, MS, Dennis Pullen (Ronda) of Dallas, TX; one daughter, Teresa Ohler of New Albany, MS; one brother, Paul Pullen (Sarah) of Coffeeville, MS; two sisters, Linda Byars, and Mary (Cubelle) Chandler both of Water Valley, MS; as well as two grandchildren, Meredith and Emily Ohler. Tinker was preceded in death by both his parents.

The family of Raymond Hall Pullen Jr. created this Life Tributes page to make it easy to share your memories.

Send flowers to the Pullen family.