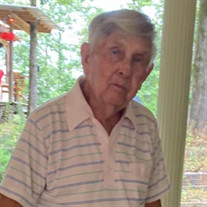 Robert Joseph Dickey, age 86, of Water Valley, MS passed from this life Monday, March 28, 2022, at his home surrounded by family. Joe was born June 25, 1935, in Water Valley to the late Marvin Wayne and Letha (Rampey) Dickey. One of eight children, Joe grew up and lived the majority of his life right here in Water Valley. Needing to help his family, Joe left school early and went to auto mechanics school in Memphis where he learned the craft he would apply to his entire career. After receiving his training, Joe came back to Water Valley and worked for all the dealerships from Pontiac, Chevrolet, to the Hendricks Ford dealership. In 1970, he opened, and ran his own shop until 1986 when he retired. When not fixing cars, Joe loved to piddle with lawnmowers, grilling and gardening. But nothing meant more to him than his family which he loved with all of his heart. Visitation is planned for Friday, April 1, 2022, in the Gardiner Room at Seven Oaks Funeral Home from 1:00 PM until 3:00 PM. Services will follow at 3:00 PM in the Henry Chapel of Seven Oaks with Bro. Chad Franks officiating. Burial will be in Camp Ground Cemetery. Joe is survived by his wife of 60 years, Jeanette Dickey; one son, Terry Dickey (Charlotte); three daughters, Debbie Jackson (Bubba), Tammy Crocker (Donnie), and Lisa Spence (Stewart) all of Water Valley; one brother, Richard Dickey of Plano, TX; one sister, Hilda Mae Dickey of Memphis, TN; thirteen grandchildren; fifteen great-grandchildren; and one great-great-grandchild. As well as his parents, Joe was preceded in death by four brothers, Billy Dickey, James Dickey, Donald Dickey, Marvin Dickey; and one sister, Mary Alice Hayles.

The family of Robert Joseph Dickey created this Life Tributes page to make it easy to share your memories.

Send flowers to the Dickey family.