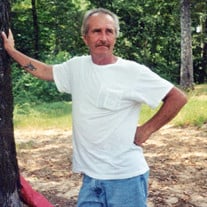 Robert Dale Tidwell, age 61, of Water Valley, MS died unexpectedly Monday, November 2, 2020, at North MS Medical Center in Tupelo. He was born May 3, 1959, in Covington TN, to Ann Davis and the late Malcolm Tidwell. Robert was a career carpenter and worked in the construction industry. When not working, Robert enjoyed fishing, hunting, making things with his hands, but nothing meant any more to him than his family. Visitation is planned for Friday, November 6, 2020, in the Gardiner Room at Seven Oaks Funeral Home from 10:00 AM until 11:00 AM. Services will follow at 11:00 AM in the Henry Chapel of Seven Oaks with Bro. Raymond Aven officiating. Burial will be in Wyatt Cemetery in Hornsby, TN. Robert is survived by his wife, Holly Tidwell; one daughter, Mallory Jean Tidwell; one son, Robbie Tidwell; one stepson, Peyton Griffin; his mother, Ann Davis; one brother, Johnny Tidwell; and one sister, Diann Goodrum, all of Water Valley, MS; and a host of nieces and nephews who loved him and he dearly loved. Along with his father, Robert was preceded in death by one brother, Ricky Tidwell; and two sisters, Margaret Tidwell, and Betty Tidwell.

The family of Robert Dale Tidwell created this Life Tributes page to make it easy to share your memories.

Send flowers to the Tidwell family.