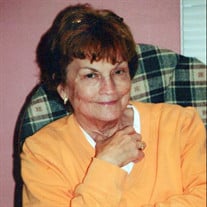 Sara Wade Bray Liles, 82, died peacefully on June 28, 2020 at North Mississippi Medical Center in Tupelo, MS. Sara was the first child of six born to Wade and Beulah Bray in Oxford, MS on July 11, 1937. Sara joined the U.S. Army after high school where she met and married Otto L. Langkawel III. They had four children together. After living in several places across the U.S. including California, Michigan, and Virginia, Sara moved back to Mississippi where she raised her four children. She worked at Kellwood in Coffeeville before working at Holley Carburetor in Water Valley for many years. It was there that she met Don Johnson whom she was married to for 20 years. After Sara and Don retired from Holley, they traveled and vacationed across the U.S. until his death in 2000. Sara married Ben Liles on Valentine’s Day in 2003. She was not a fan of flying so she and Ben took the train several times to visit Patty in Idaho and Montana. When Sara’s health started to decline in the last year, Ben took care of her and was by her side every day. Sara was a very active member of the First Baptist Church in Coffeeville, MS. She loved to read and was a frequent visitor to the Coffeeville Public Library, often finishing several books per week. Sara is also registered at the Women in Military Service for America Memorial in Washington D.C. In retirement, Sara and Louise Byford walked almost every morning together. Sara leaves behind her husband Ben, her four children: Patty Lincoln, Denver, CO; Mary Hensley, Bruce, MS; Larry Langkawel (Nan), Coffeeville, MS; JoAnn Langkawel, Coffeeville MS; her step-daughter Linda (Chris), Coffeeville, MS, thirteen grandchildren: LeAnn (Chris), Megan (Andy), Nicole (Justin), Brandy (Michael), Mallory, Cody (Hannah), Chad (Mary), Hayden (Lisa), Joseph, Autumn, Joel (Elanor), Dylan, and Matt, thirteen great grandchildren, several nieces and nephews, cousins, and one uncle, Bobby Koonce. Visitation is planned for Thursday, July 2, 2020 from 5:00 PM - 7:00 PM at Seven Oaks Funeral Home in Water Valley. Funeral services will be held Friday, July 3 at 10:00 AM at First Baptist Church in Coffeeville. Interment to follow at Pinecrest Memorial Gardens in Water Valley.

The family of Sara Wade Liles created this Life Tributes page to make it easy to share your memories.

Send flowers to the Liles family.