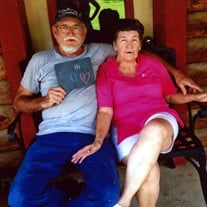 Sherry Ramey Raines, age 71, of Water Valley, MS died Thursday, September 26, 2019 at Baptist Memorial Hospital in Memphis, TN. She was born November 24, 1947 to the late James and Mary Alice (Smith) Ramey and dedicated her life to her family by being a homemaker. She had a special talent for drawing, especially horses and other animals. She also loved the music of Elvis, but nothing was any more special to her than loving her grandchildren. Visitation is planned for Monday, September 30, 2019 in the Gardiner Room at Seven Oaks Funeral Home from 2:00 PM until 4:00 PM. The family will hold a private service at a later date. Sherry is survived by her husband of fifty-five years, Howard Lee Raines; one son, Terry Raines of Water Valley; three daughters, Robin Norton of Oxford, MS, Erica Raines of Water Valley, and Tammy Harris (Randy) of Byhalia, MS; four brothers, Randy Ramey, Steve Ramey (Pam), Eddie Ramey, all of Southaven, MS, and Sherrell Ramey (Debbie) of Blytheville, AR; one sister, Sandy Marshburn of Southaven, MS; ten grandchildren and four great-grandchildren. Sherry was preceded in death by both of her parents.

The family of Sherry Ramey Raines created this Life Tributes page to make it easy to share your memories.

Send flowers to the Raines family.