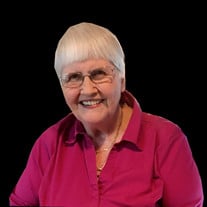 Shirley Mae Johnson, age 72, of Paris, MS died Wednesday, September 11, 2019. She was born January 30, 1947 in Chicago, IL to the late Victor and Genevieve (Small) Gulpa. She enjoyed creating miniature furniture, quilting and karaoke, but nothing compare to the love she had for her family. She was a member of First Christian church in Water Valley and of the NRA. Visitation is planned for Monday, September 16, 2019 in the Gardiner Room at Seven Oaks Funeral Home from 1:00 PM until 2:00 PM. Services will begin at 2:00 PM in the Henry Chapel of Seven Oaks with Bro. Raymond Aven officiating. Burial will be in Shipp Cemetery. Shirley is survived by two sons, Billy Johnson (Letha) and Victor Johnson (Joveth Lee), all of Paris, MS; two brothers, Ed Kulpa of CA, and Ed Joyner of TN; 4 grandchildren, William Les Johnson, Corey Tartt, Angela Ayers, and Alexa Johnson; as well as 4 great-grandchildren, Murphy Johnson, Christopher Johnson, Emma Ayers, and Elizabeth Ayers. Along with her parents, Shirley was preceded in death by her husband of 38 years, Jack Johnson; one daughter Kathy Tartt; and and one sister, Sue Little.

The family of Shirley Johnson created this Life Tributes page to make it easy to share your memories.

Send flowers to the Johnson family.