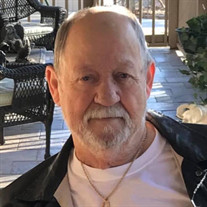 Stanton “Pete“ Bennett, age 79, of Water Valley, MS departed this earthly life Wednesday, December 3, 2020, at his home with his wife Rose by his side. He was born to the late R.C. and Ruth (Hilliard) Bennett April 18, 1941, in the Carolina Community of Itawamba County. With a love for music, Pete left school and moved to Texas to play in a rock-and-roll band. After moving back to the region, He went to work driving a truck for Schumpert Trucking in Amory, MS, which later was bought by Roadway Express in Memphis, TN, where he retired after twenty seven years. He was a member of the teamsters local 667 where he served as the secretary of the treasurer, and President for two-and-a-half years until his retirement. Pete loved crappie fishing and growing a garden. Once the harvest came in, he enjoyed taking vegetables around to his neighbors. Visitation is planned for Saturday, December 5, 2020, in the Gardiner Room at Seven Oaks Funeral Home from 12:00 Noon until 2:00 PM. Services will follow at 2:00 PM in the Henry Chapel of Seven Funeral Home. Pete is survived by his wife of 33 years, Rose Bennett; four sons, Stanton Bennett Jr (Vickie) of Amory, MS, Steve Harmon (Lisa) of Collierville, TN, John Petty (Jovita) of Olive Branch, MS, Ryan Petty of Water Valley, MS; four daughters, Mitzi Frederick (Will), Tammy Marrison, Kim Jarrett (Steve), Jeannie Smithey (Joel) all of Amory, MS; four brothers, Nolan Bennett of Fulton, MS, Donnie Bennett (Debbie) of Peaceful Valley Community in Itawamba County, Tony Bennett (Penny) of Tyler Texas, Jerry Bennett (Sheila) of Smithville, MS; two sisters, Francine Estes (Willie) of Fulton, MS, Nita Duncan of Tilden, MS; twenty-two grandchildren; twenty-nine great grandchildren; one great great grandchild; and one very special friend, Joe Pat Pilkington. Along with his parents, Pete was preceded in death by two brothers, Richard and Brandon Bennett; and one sister, Nancy Bean. Seven Oaks Funeral Home’s number one priority during these unprecedented times, is the health of our staff, our families, our visitors, and our community. With this in mind, we are adhering to guidelines set forth by the CDC, Gov. Tate Reeves, and the Mississippi Department of Health. At this time, we are asking everyone to support the limited gathering and visitation policies mandated by our government officials, which include a maximum of 50 people in the funeral home, or alternate place of service, at one time for visitations, funerals and graveside services. We are also asking everyone to comply with the required social distancing space of six feet, as well as advising against intimate contact such as, hand-shaking, hugging, and kissing. Masks are mandatory at this time.

The family of Stanton "Pete" Bennett created this Life Tributes page to make it easy to share your memories.

Send flowers to the Bennett family.