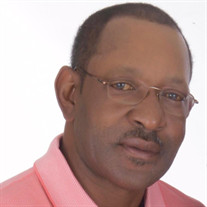 Wade Williams, age 62, of Water Valley, MS went to his heavenly home Friday, July 9, 2021, at his home surrounded by family and friends. He was born to S.T. and Bettie (Woodard) Williams July 21, 1958, in the Velma Community of Yalobusha County. Wade was brought up in the Word of God and surrendered his life at an early age at Rocky Mtn. M.B. Church where he was baptized. He was a lifelong resident of Yalobusha County, and after graduating from high school began a thirty-six year career working with the County on its road crew. Wade was not only dedicated to his career, he was also a dedicated husband, father and “papa”. Years before marrying Sandi, a spark was ignited as they met in a ditch in front of Sandi ‘s grandmother house when she was going for a visit. Approximately 21 years later they began their life long relationship. When Wade made time for himself, he loved to play dominoes, checkers, ride four-wheelers, and working on old cars. But nothing meant any more to him than his family, especially his grandchildren. A wake is planned for Wednesday, July 14, 2021, in the Gardiner Room at Seven Oaks Funeral Home from 5:00 PM until 7:00 PM. A service to honor his life will be at 11:00 AM, Thursday, July, 15, 2021 Everdale Missionary Baptist Church with Pastors Phillip Brackett and Kevin Lee officiating. Burial will follow in Rocky Mountain M.B. Church Cemetery with Perry Hervey, Chris Caldwell, George O. Woodard, Melvin Woodard, Dale Woodard, and Ronnie Person serving as pallbearers. Wade is survived his wife of twenty-seven years, Sandi Williams; one son, Jonathan Nevol of Utica, MS; one daughter Kaitlynn Gerhart of Water Valley; three brothers, Johnny Woodard, Steve Woodard, Keith Woodard; four sisters, Barbara Person, Hazel Alexander, Joyce Woodard, Stephanie Alford; and two precious grandchildren, Grayson and Quincey. Wade was preceded in death by both of his parents.

Wade Williams, age 62, of Water Valley, MS went to his heavenly home Friday, July 9, 2021, at his home surrounded by family and friends. He was born to S.T. and Bettie (Woodard) Williams July 21, 1958, in the Velma Community of Yalobusha County.... View Obituary & Service Information

The family of Wade Williams created this Life Tributes page to make it easy to share your memories.