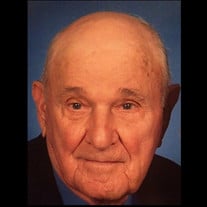 Walter Everett Musick, age 96, of Oxford, MS died peacefully Tuesday, March 3, 2020 at the Veterans home in Oxford, MS. He was born November 25, 1923 in Tula, MS to the late Emmett and Ethel (Welch) Musick and honorably served our country in... View Obituary & Service Information

The family of Walter Everett Musick created this Life Tributes page to make it easy to share your memories.

Send flowers to the Musick family.