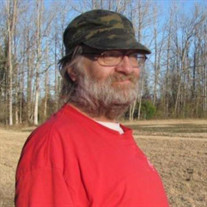 William (Ricky) Dalton, age 62, of Paris, MS died unexpectedly Wednesday, December 23, 2020, at Baptist Memorial Hospital in Oxford, MS. He began his earthly journey January 12, 1958, in Water Valley, MS to the late James and Lavelle (Harmon) Dalton. Part of the well known Harmon family, he worked in a couple of the family businesses early in life. He began his career by hauling watermelons for Harmon produce, then later working for Harmon logging. Ricky later went to work for Big Yank in Water Valley as a “turner” until the business closed. Ricky was a down to earth, fun-loving, country boy as evidenced by his hobbies, which included fishing, riding four-wheelers, mud ridin’, and target shooting. The family has chosen a private family service. Ricky is survived by one son, Dylan Dalton; one daughter, Dana Dalton (Fiance' Hayden Self), all of Paris, MS; and one step-grandson, Harvey Kaup. In addition to both of his parents, Ricky was preceded in death by one sister, Donna Dalton.

The family of William (Ricky) Dalton created this Life Tributes page to make it easy to share your memories.

Send flowers to the Dalton family.