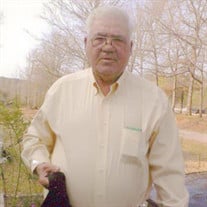 William Ernest Wilson, age 73, of Water Valley, MS died peacefully Monday, February 24, 2020 at Yalobusha General Nursing Home. He was born July 2, 1946 in Charleston, MS to the late Ernest and Eura Mae (Hardy) Wilson. William had at one time worked as an under water welder in the shipping industry, and later retired as a diesel mechanic. He was a down to earth man who enjoyed fishing and hunting. It is said that the only thing William loved more than a good prank was telling stories. Visitation is planned for Thursday, February 27, 2019 in the Gardiner Room at Seven Oaks Funeral Home from 6:00 PM until 8:00 PM. Services will begin at 11:00 AM Friday February 28, 2020 in the Henry Chapel of Seven Oaks with Bro. Freddy Moorman officiating. Burial will be in Elam Cemetery in Coffeeville. William is survived by two sons, Roger Wilson (Kimberly) of Eureka, CA, Robert Wilson of Oakland, MS; one daughter, Deborah Haton of Henderson, NV; two sisters, Jimmy Mae Sholly of Memphis, TN, Martha Sue Hill of Water Valley, MS; six grandchildren; two great-grandchildren; and numerous nephews and nieces, which included Amanda Byars who was his care giver. Along with his parents, William was preceded in death by one brother, Johnny Wilson; and four sisters, Barbara Organ, Dorothy Emerick, Joan Downs, and Brenda Henderson.

The family of William Ernest Wilson created this Life Tributes page to make it easy to share your memories.

Send flowers to the Wilson family.