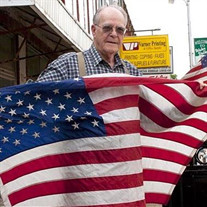 Willis Aaron Holder, age 93, of Water Valley, MS died peacefully Wednesday, February 6, 2019. He was born January 16, 1926 in Finger, Tennessee to the late Jessie Earl and Laura Beene Holder. He attended Sylva Rena Baptist Church. He obtained his pilot’s license at the age of 17 and enjoyed the sport for several years. During his early years, he supported his family as a meat cutter for various companies, including the Kroger Grocery Company while living in Memphis, Tennessee. In 1963, Aaron, his wife and son moved to Water Valley. He became a barber upon completion of Barber College in Memphis. He was a practicing barber until his first retirement in 1991 at the age of 65. At this time, he and Bernice, his wife of almost 59 years, began traveling, camping, and visiting their family out west. Following several years of retirement, he returned to the barber shop and the customers he loved so dearly. Eventually, due to the failing health of his wife, Bernice, he chose to set up a small shop attached to their home south of Water Valley. Even after her death in 2014, he continued to cut hair for anyone who stopped by until the age of 90. Due to failing health, he moved to Olive Branch to be closer to family members who contined to care for him until his death. His simple life and the integrity which was instilled upon him during his early years followed him throughout his entire life. He never met a stranger, and when compelled, was eager to lend a helping hand to anyone in need. Well known, and loved by many in his community, he will be greatly missed. Visitation is planned for Saturday, February 9, 2019 at Seven Oaks Funeral Home from 10:00 AM until 12:00 Noon. Services will begin at 12:00 Noon in the Henry Chapel of Seven Oaks with Bro. Brad Burnett officiating. Burial will be in Oak Hill Cemetery with Andrew Holder, Lee Hutcherson, Sam Westcot, Ray Dill, Roy Bennett Stevens, and Frank Brooks serving as pallbearers. Aaron is survived by his son, Charles Allen Holder of Olive Branch, MS; a step-daughter, Barbara Joy Scott of Olive Branch, MS; three grandsons, Donnie Holder of Yakama, WA, Lee Hutcherson (Stephanie) of Olive Branch, MS and Andrew Holder of Memphis, TN; and two granddaughters, Fauna Gutierrez (Richard) of Yakama, WA, and Candice Westcot (Sam) of Southaven, MS; and six great grandchildren, Alex Gutierrez, Alissa Gutierrez, Sam Hutcherson, Tyler Hutcherson, Maddie Westcot, and Charlotte Carol “Charlie” Westcot. In addition to his parents, he was preceded in death by his wife, Bernice Holder; two sons, William Aaron Holder and Donald Wayne Holder; and four sisters, Marie Holder, Mary Lee Holder, Mildred Stella and May Dell Morris.

The family of Willis A. Holder created this Life Tributes page to make it easy to share your memories.

Send flowers to the Holder family.